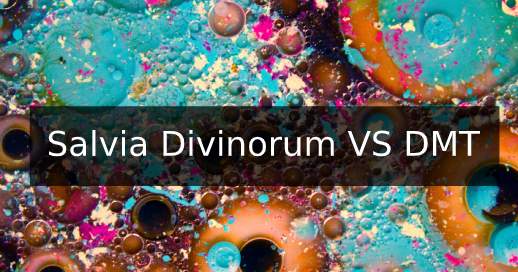 There is quite a high level of confusion arising from the use of Salvia divinorum (the sage of the diviners) and DMT (N, N-Dimethyltryptamine) since they both actively involved in serving as hallucinogenic drugs. They are both administered by smoking and may produce short term effects last between 5-15 minutes. Apart from the fact that they are administered orally, DMT and Salvia possess some distinct properties in their functions, source and properties. In this article, we shall discuss the common differences between Salvia and DMT based on the following headings.

While Salvia divinorum (sage of the diviners) is a herb belonging to the sage family native to Mexico. They possess some excellent hallucinogenic properties which have been widely utilized by Native Americans for medical and religious purposes, DMT is a hallucinogenic tryptamine drug found in both animal and plant species. It occurs in the Ayahuasca plant native to South America and can be manufactured.

At the time of writing this article, DMT is classified by the DEA as a Schedule 1 controlled substance thus suggesting that it may not have some medicinal utility or has a high tendency to be abused by users. All schedule one drugs are likely to cause physical and psychological dependence. Salvia, on the other hand, is completely safe for consumption. As a non-controlled substance by the DEA, it is clear that Salvia is legal for use in some states while some states may restrict is usage.

Although Salvia and DMT can produce hallucinogenic properties on users, the experience tends to differ slightly. While the salvia experience produces a cartoonlike hallucination accompanied by talkativeness and uncontrollable laughter, the DMT experience is often linked with a heightened sense where the users may feel as if their senses are enhanced. DMT also produces a condition known as synesthesias, where people believe they can see and taste sounds while hearing colors. Although it is widely believed that DMT produces a more intense effect on users than Salvia divinorum, there are strains of Salvia that are capable of producing a stronger trip than DMT.

DMT is a powerful psychedelic and hallucinogenic substance that binds to and activates the sigma-1 receptor can protect against cell death and inflammation while Salvia contains Salvinorin A, a kappa-opioid receptor agonist. It can act on the kappa opioid receptors to produce psychoactive effects lasting for several hours.

It will interest you to note that both DMT and Salvia offer the same level of side effect on users. They can trigger fatigue, headache and memory issues. It has also been documented from anecdotal reports that those who use Salvia present a higher level of dysphoria than those using DMT.

Don’t forget to contact us if you have questions on the common uses of Salvia and DMT. We will love to hear from you soon.